Model Overview
The 2010 Chevrolet Tahoe and Suburban are lines of full-size sport-utility vehicles that are very similar, but the Suburban is 20 inches longer.
Both the Tahoe and Suburban are offered in LS, LT and LTZ models, with either rear-wheel drive or 4-wheel drive for each. Suburbans can be specified either as standard-duty 1500 models or heavy-duty 2500 models. The Tahoe can tow up to 8,400 pounds, while the Suburban 2500 can tow up to 9,600 pounds when properly equipped.

A 320-horsepower, 5.3L V8 engine featuring E85 capability is the only available engine option for the Tahoe, although a 6.0L is combined with an electric motor on hybrid models, making a combined 332 horsepower. The same 5.3L V8 is standard on 2WD and 4WD Suburban 1500 models and the heavy-duty Suburban 2500 comes equipped with a standard 6.0L V8, which makes 352 horsepower and 383 lb-ft of torque.

The 5.3L and 6.0L engines both come equipped with Active Fuel Management, which cuts off fuel to half of the cylinders in some conditions when full engine power isn't needed.

The Tahoe Hybrid model, which joined the lineup in 2008, gets a 6.0L V8 as part of a 2-Mode hybrid system that is capable of powering the Tahoe at low speed on electric power alone, while at higher speeds the electric motor system assists the gasoline engine for more efficient accelerating and passing. The Hybrid has 8-passenger seating and can tow up to 6,200 pounds.

The stiff, fully boxed frame of Tahoe and Suburban helps provide the structure for heavy hauling and towing and also reduces vibration in the passenger cabin. There's also extensive noise-reduction material used throughout the models inside the headliner, over the engine, in front of the dash and in door seals.

Luxurious LTZ models get a smooth Autoride suspension system, which has two modes of damping--one firmer, one softer--which it can switch between quickly depending on driving conditions.

Inside, the Tahoe and Suburban have a sophisticated instrument panel design, with LED backlighting and chrome accents, which is smoother and more car-like in design than most other full-size SUVs. Bluetooth hands-free connectivity is standard.

Roof-mounted head-curtain air bags with rollover protection, covering all three seating rows, are standard across the model lines, and side impact airbags are also now standard. StabiliTrak electronic stability control and anti-lock brakes are also included with both models. 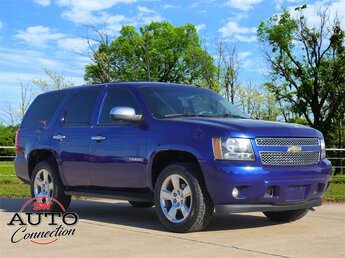 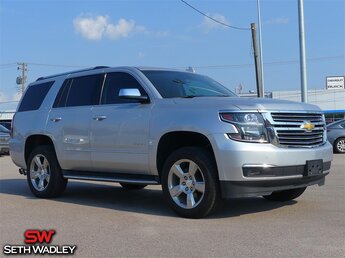 2009 Chevrolet Suburban 1500 LT w/2LT
White
* Pricing - All vehicle pricing shown is assumed to be correct and accurate. Incentives, credit restrictions, qualifying programs, residency, and fees may raise, lower, or otherwise augment monthly payments. Additionally, incentives offered by the manufacturer are subject to change and may fluctuate or differ based on region and other considerations. Unless otherwise noted or specified, pricing shown does not include title, registration, or tax fees and costs.